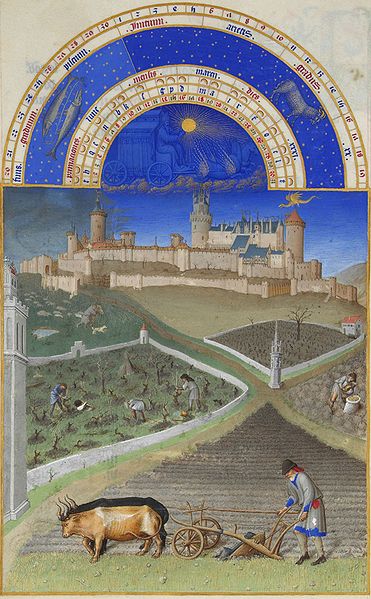 March was originally the first month of the year in the Roman calendar. It gets it’s name from the Roman god Mars who was the god of war. Mars was not only a Roman god but also a name for a planet. Now the Romans used planets for the days of the week, and Mars is also found to be the third day of the week; dies martius, which is Tuesday, and is still used in some languages to this day, for instance Mardi Gras means Fat Tuesday and in the Spanish language Tuesday is called Martes.

March was when spring would begin to break as winter came to an end which is why it was originally the beginning of the Roman year. In the scene from Les Très Riches above, we see fields being prepared for planting, trees without foliage and a dragon on top of the castle; the Chateau de Lusignan, that seems to be blowing the grey clouds of winter back. The Focus of the scene is on one of the great inventions of the early middle ages, the heavy plough. In use from the 5th century in the west, these ploughs allowed more land to be tilled in a more effective manner. This would increase the ability to cultivate and grow food and as a result helped to increase the population.

The penitential season of Lent would usually fill up the month of March. In earlier times other names were used for the 40 days before Easter, but in the middle ages the English word for spring, (Lent) was adopted.

March 21 is the Spring Equinox which is officially the beginning of Spring. It occurs when the Sun is directly over the equator and as a result the daylight and nighttime hours are equal. Equinox comes from two latin words, aequus (equal) and nox (night).

I remember growing up in New Jersey, that we would have Spring Break near the end of March and right around the Equinox. Snow would be melting but we would be outside playing in T-shirts because it was so warm. You could smell the earth in the air, as frozen ground began to loosen.

Feasts from the General Roman Calendar for the month of March are: