Maybe you’ve seen them before; in christian art, on the walls of a church, on the cover of the Evangelion/Lectionary or Gospel book used in the Liturgy. The Man, the Lion, the Ox and the Eagle. Four symbols that have been associated with the writers of the Gospels; Matthew, Mark, Luke and John. Often they will appear in relation to the Evangelists, behind or below though they also appear alone like the example from the Book of Kells above.

From the Gospel of Henry the Lion 12th century.

The history of these symbols in christian symbology dates back to St. Irenaeus of Lyons (c.120-202 AD) when he ties in the four accepted Gospels with the Four Living Creatures found in the Hebrew Scriptures in the first chapter of Ezekiel. Irenaeus wasn’t alone; Jerome, Augustine and Pseudo-Athanasius also used the symbols, but associated the different animals to different Gospels. Jerome’s interpretation is the one that stuck:

These are general ideas about the symbology of the animals and more can be found about them on the web or in a good history book. My first time seeing one of them was on the cover of an album from the group Iona, called The Book of Kells. An excellent album; progressive and spiritual, I found the cover picture of the Eagle fascinating. Later, after finding out about the Evangelical Symbols, I began to notice them in the church buildings I ventured into. Not that they are in every church, but in many of the older church buildings, especially those that have an abundance of art you may see them, on the roof or surrounding the altar. 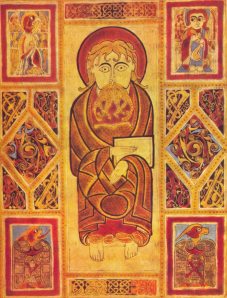 St. Mark with the Evangelical Symbols surrounding. From the Lindisfarne Gospels. 7th-8th Century.

One thought on “The Evangelical Symbols”