Archive for the category “Book of Hours”

After the Gospel readings it was common to have a set of prayers to the Virgin Mary. I have completed the first and longest of the two prayers. This is the Obsecro Te, which translates as “I beseech thee”. Devotion and prayers to The Virgin Mary date back to the earliest years of Christianity and so it’s not surprising to find these in a book of hours. The prayers to the Virgin were sometimes personalized toward the intended owner of the book of hours. I have opted to represent the prayer as translated. 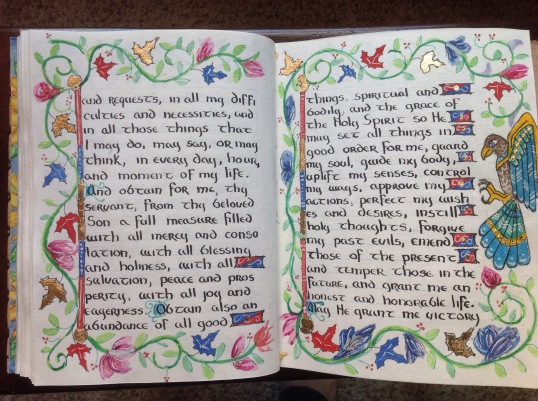 END_OF_DOCUMENT_TOKEN_TO_BE_REPLACED

Gospel reading from Luke. The Evangelical symbol of the bull belongs to Luke. Stuck to a more traditional book of hours scheme for the reading on this one. Lots of gold mixed with vines and wildlife. 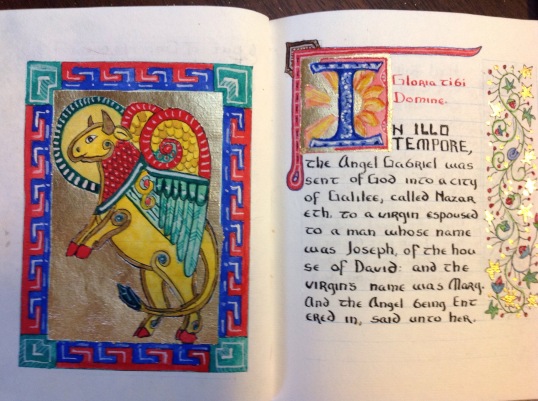 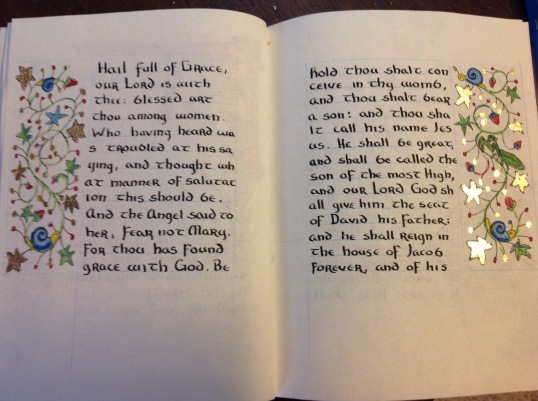 Here is the reading from John. Was able to find some pictures on the net to reference the Evangelical Symbols. Johns is the eagle. I also chose to start the reading in Latin which will continue on the other readings. 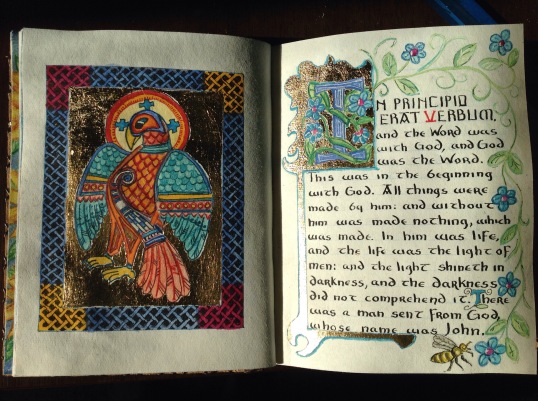 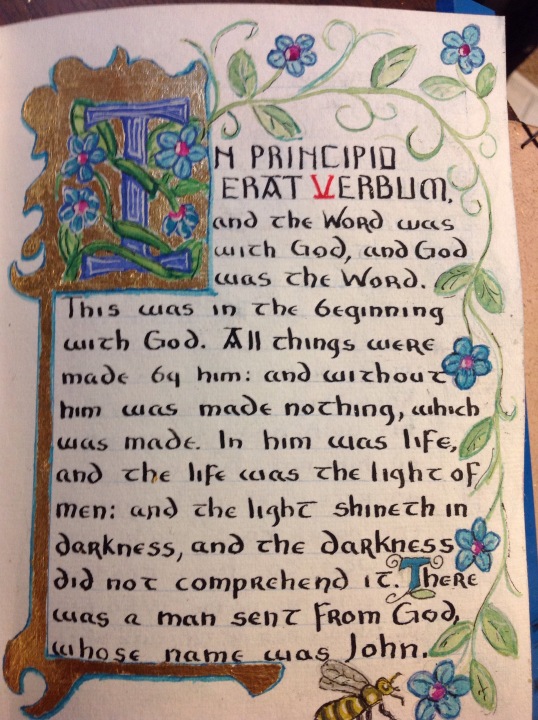 Have a few updates I’m hoping to put out today. The last month of the calendar I completed about a weeks ago. I was very excited with this last calendar entry for a few reasons. I was looking forward to getting into new sections of a book of hours, (the gospel readings). December and Christmas are favorite times of the year and I had a lot of ideas for the art. I also planned to do some kind of Saint or Icon referencing the incarnation. 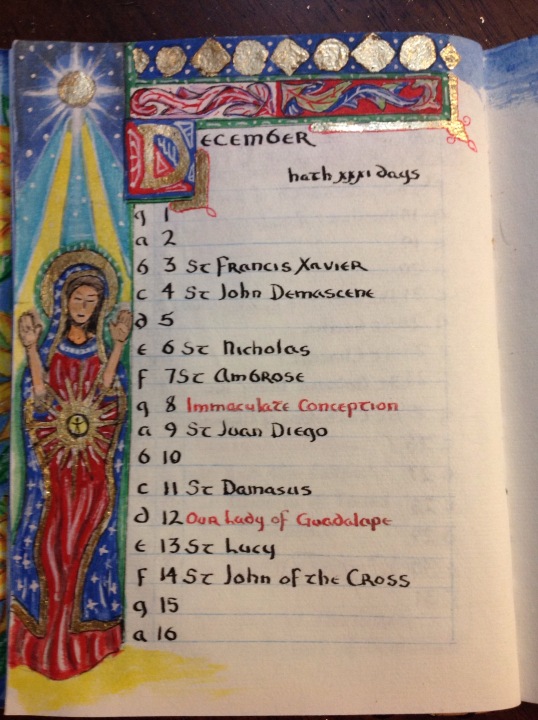 Really the first time to try drawing a Saint or human figure in the book. I know I have mentioned several times that I am a hack at this. Not really a refined artist, my calligraphy is not that great….. But drawing hands… yikes! I was happy with the Virgin Mary that I drew but those hands took several attempts to get right. I am satisfied with the final and hope this gets easier as I do plan to have more of this.

Ending the calendar I had planned for a while to have a winter scene with cardinals and snow. A simple scene of winter.

November kicks off with the feast of All Saints and follows with All Souls. I used the “Dia de los Muertos” as a theme. One of my favorite holidays, as a child and to this day, is Halloween. But All Hallows’ Eve, is really just the beginning of a multi day holiday which sadly has lost its connection to the “dear departed”.
In Catholic tradition, dressing up and giving treats, “soul cakes”, goes back about a thousand years; remembering saints days goes back to the first martyrs and as this calendar shows they are still remembered.  The Day of the Dead also has ancient roots in pre-Colombian indigenous Mexican cultures. Remembering the dead, praying for the dead, setting altars or candles at grave sites, reciting the names of saints or church members who have past away in the last year, writing the names of the departed in a book of the dead, are some of the ways the holiday is still practiced.

Sugar sculls “Calaveras” are given to children and left at grave sites in “Day of the Dead” traditions. Sculls are a common symbol in Catholic art and iconography and are found in Aztec, Mayan and Toltec traditions as well. I still remember staying up late on the weekends as a kid to watch “Fright Night” which was a late night show that played horror movies. The opening was a green spooky skull. 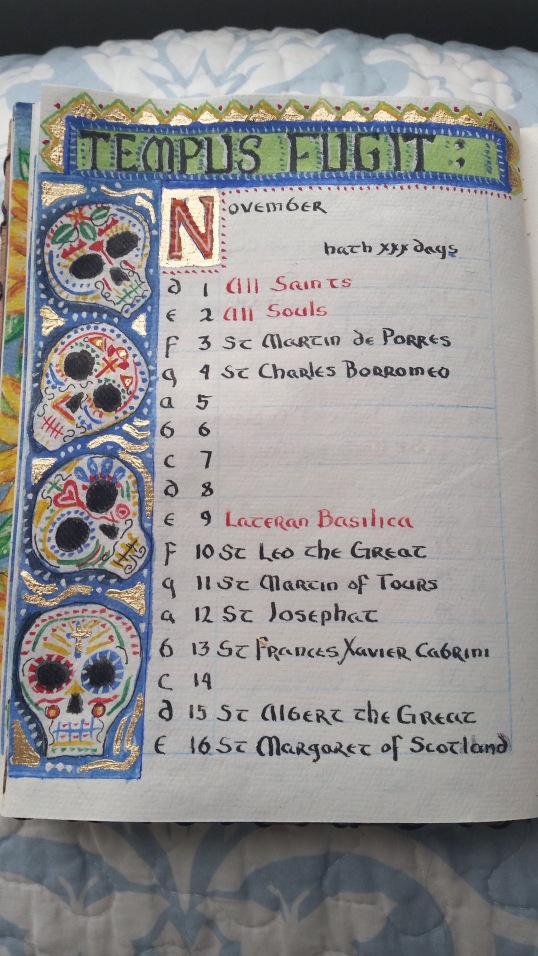 La Catarina is a popular image of Death in Mexico and a common costume when celebrating the Day of the Dead. This was my first attempt at a human figure in the book. Had to re work a few times. Being a hacker has its limits, but I do plan on doing some more human figures in the book so I guess this was a good place to start. There was also some intent here as the liturgical year closes at the end of November and begins with Advent which starts four weeks before Christmas during the last days of November.

October I wanted another contrasting theme like I used in April and thought the transition of Autumn made the most sense as a theme. As a kid I remember the beautiful falls in New Jersey as October began. By the end of the month the trees were bare and I can remember being out in the dark for Halloween and seeing the black branches against the fading light. And yes a little nod to the Eve of All Hallows’. Couldn’t resist.

September with fish and turtles

September ended up more on the whimsical side. Was partially inspired by a recent visit to St. Augustine, Florida. Some of the seaside local art helped me along with the theme for this month.

August was a re-visit to the Flemish art style. Flowers with shadows make the panel art seem to pop out of the page. My first try at this was in February with Oak leaves.

So the top picture is obviously a rose surrounded by gold foil, the side panel… Are doodle flowers and I’m not sure if they could be tied to an actual type of flower in existence.

On the second page is Thistle surrounded by gold and on the side panel are Geranium. These grew wild in Alaska and I had a few of these planted in my yard when I lived there. They came back every year.

For July I looked back on January. My first attempts in my book of hours were full of trial and error. I revisited what I envisioned and here is the result. I will probably continue to re-do the first part of the year in the second half to see where I grew.

Ivy with gold leaves and a few animals. I used watercolor pencils for the peacock feathers and took a quick lesson on you tube on how to make them. Overall very happy with July and seeing my progress.

First page had a huge blunder on one date where I put the Saint on the wrong day. Blotted out to cover and shows. Will start focusing on the illuminated letters going forward. I figure that once I complete the calendar and move into other parts of the hours I will allow more room for this and have some fun.

Second page had no big blunders. Mixing the gold leaves with a few greens, red berries, a bird and a snail. 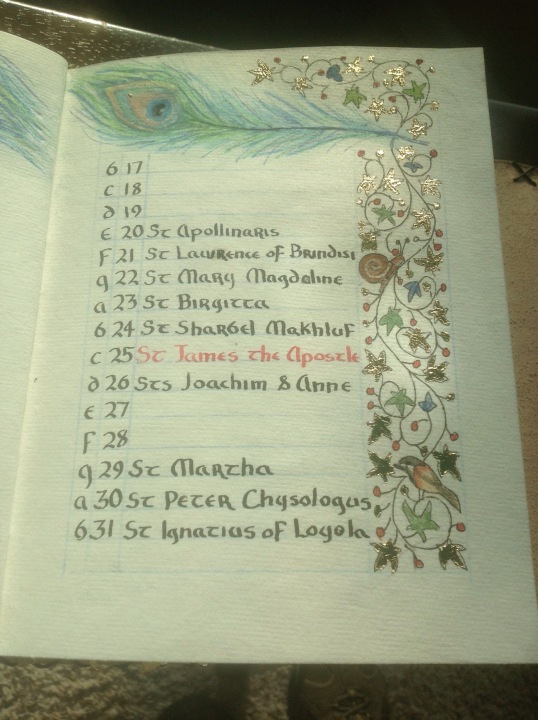 I decided to try a few designs from the Book of Kells in June. I ended up looking through several old manuscripts that fall into the Insular style of art. These include the Lindisfarne Gospels, Book of Durrow, Cathach of St. Columba, and of course the famous Book of Kells. So my poor attempts at knot work fill the pages here. Will need to work on these for better consistency and in future attempts to make them smaller and more fluid. 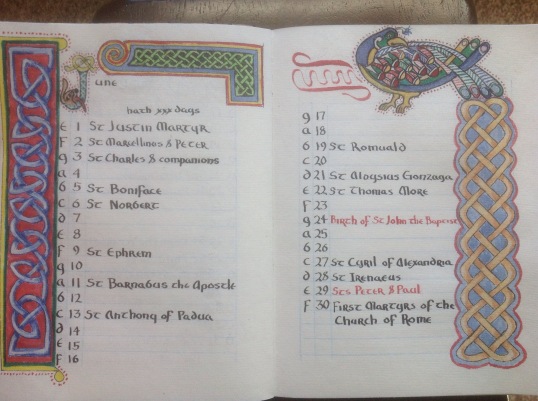 the second page. Keeping with the style of insular illumination I didn’t add any gold foil to the pages in June. Insular illumination draws from the complex designs and imagery blended with the bright and carried colors. Yellow probably being used the most, other colors include purple, red, blue and greens. Animals and people also find their way into many of the designs in these books. If you ever have a chance to look at the art from Kells or Lindisfarne, you will see many times that even the knot work is a construct of animal shapes that have been morphed into the knot work. Truly amazing art.

I am most happy with the peacock on this page. I spent a lot of time trying to get the

right feel on this and in the end it is the main attraction for June. Looking forward to doing more of these Celtic style designs in my book of hours and with any luck my knots will get better. …