Archive for the tag “order of st. clare” 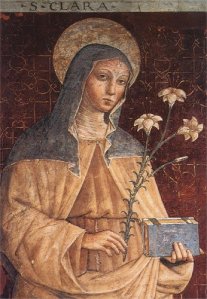 Born in 1174 as Chiara Offreduccio, St. Clare is known as the first woman follower of St. Francis of Assisi.  At the age of 18 she left her home to follow in the religious life, embracing the life of poverty, love and contemplation, which are the trademarks of the Franciscans.

Catholic history is chock full of women saints who were educators, mystics, servants, examples of humble faith and set examples for all of us to follow down through the ages. She stands against the sad reality of modern stereotypes about women in the church and history, which often tries to dismiss the role of women in the church and in European life. Christianity from the start set the stage for  women to advance in status from the ancient world. Women are mentioned in the New Testament, in martyrologies, in the mass, have churches names after them. St. Clare not only participated in that rag-tag group of mendicants which would in later years become one of the most recognized monastic communities, she also established her own rule, The Way of Gospel Living, thus setting into motion the Order of Saint Clare, or the Poor Clares which as of 2011 it was recorded there were over 20,000 Poor Clare Nuns.

The feast day of St. Clare falls on August 11th, 1253, the day she died and two days after Pope Innocent IV, confirmed her rule as the official guide for the Poor Clares.

“Totally love Him, Who gave Himself totally for your love.” – St. Clare